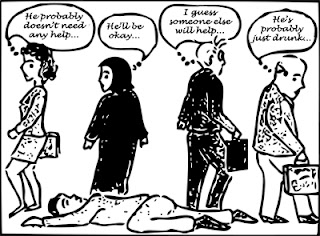 The bystander effect refers to: the more people, the less personal responsibility. It can be associated to cases where individuals do not offer any means of help in an emergency situation to the victim when other people are present (e.g. person being attacked or mugged during daylight and no one intervening or calling the police). The probability of help has often appeared to be inversely related to the number of bystanders. I find this very interesting. Why does this happen? Is this related to brain coupling, joint action? Find the causes below.

One of the reasons is noticing: In groups people are less likely to be looking around. As a result, in large groups, passers-by are more likely to be keeping their attention to themselves, than when alone, where people are more likely to be conscious of their surroundings and therefore more likely to notice a person in need of assistance. However, this is not the only factor. Taking responsibility requires interpreting the incident as an emergency situation. After more bystanders have noticed the incident, they are interpreting each others actions to see whether intervention is needed. Since everyone is doing exactly the same thing (i.e. observing), they all conclude from the inaction of others that help is not needed.

Moreover, taking responsibility involves cognitive decision-making processes, such as cost/benefit appraisal. Cognitive appraisal suggests that after a person notices someone in need, a decision-making process takes place about whether to intervene. This involves considering potential benefits  and costs of intervening (e.g. benefit: social approval, cost: being harmed) and not intervening (e.g. benefit: avoiding harm and injury, cost: guilt and shame). Furthermore, each bystander assumes that someone else is going to intervene and diffuses his responsibility to another person.

This to me is an example of joint action, and yet another sad example of losing one's individuality in a group.

One of the most famous examples of bystander effect:
"The case of Kitty Genovese is often cited as an example of the "bystander effect". It is also the case that originally stimulated social psychological research in this area. On March 13, 1964 Genovese, 28 years old, was on her way back to her Queens, New York, apartment from work at 3am when she was stabbed to death by a serial rapist and murderer. According to newspaper accounts, the attack lasted for at least a half an hour during which time Genovese screamed and pleaded for help. The murderer attacked Genovese and stabbed her, then fled the scene after attracting the attention of a neighbor. The killer then returned ten minutes later and finished the assault. Newspaper reports after Genovese's death claimed that 38 witnesses watched the stabbings and failed to intervene or even contact the police until after the attacker fled and Genovese had died. This led to widespread public attention, and many editorials."
Posted by Sandra Buda at 16:20