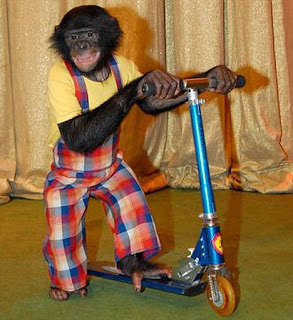 With so much financial turmoil in the past few years, the cognition of economics has become a popular topic. Research in this area has taken two approaches: 1. analyzing the cognitive system to understand why people make certain choices regarding economic theory; and 2. analyzing economic trends in the hopes of extrapolating the cognitive processes that produced certain consequences. While both strategies sound good in theory, what if neither is the correct approach? What if the economy is something other than some combination of environmental and cognitive factors?

While this hypothesis has not been explored exhaustively, a Russian chimp named Lusha offers some interesting insight. In 2009, Lusha (see here) was given 1,000,000 RUB (about €25,000) to invest in eight companies of her choosing. Shockingly Lusha’s portfolio outperformed 94% of Russia’s investment funds that year.

The obvious explanation for Lusha’s success is luck—indeed not only is it unlikely that she possesses the financial know-how to invest wisely, but also that she could apply that information so successfully.  In fact in light of Lusha’s success, one Russian financial expert conceded that “financial knowledge does not play a great role in giving forecasts to how the market will change”.

This begs the question: if economic forecasting is “usually a matter of more or less successful guessing”, why has it been the subject of so much cognitive scrutiny? Do cognitive scientists hope to elicit some emergent theory of economics? Do they simply hope to understand why people act the way they do? Either way neither of these topics is directly addressed by the aforementioned theoretical approaches.

Are there other areas of cognitive research where results address issues beyond the scope of the original hypothesis?  It seems that if researchers hope to understand either cognition or a certain phenomenon, they must more directly focus their efforts in the future, or risk slipping on a figurative banana peel.


To learn more about chimpanzees and cognition, check out this and this.
Posted by Travis at 08:04