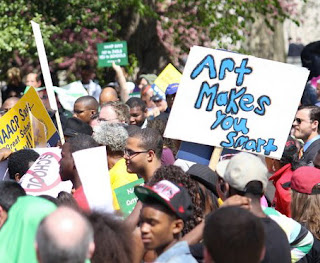 Times in which art was done or appreciated purely for its own sake (if these times have ever existed) are clearly over: Nowadays people do not only want to possess art(works or knowledge) to impress their friends and work mates, no, art is also good for your brain!

Everyone has surely heard of the popularized version of the Mozart Effect, which suggested that "listening to Mozart makes you smarter", or that early childhood exposure to classical music has a beneficial effect on mental development.

In recent years the over-dramatization of these effects (which in 1998 still led an U.S. governor to spend $105,000 a year to provide every child born in his state with a classical music CD) became clear to the public, but the general question of whether arts training can change the brain to enhance general cognitive capacities is still a popular among researchers.

But when one comes to read studies in this topic area (and even more so the Pop Sci articles resulting from those), I often find the findings less striking than proposed or, to be more specific, I find them lacking of a good evaluation of the kind of relationship between the art training of whatever form on the one hand and the specific cognitive capacity under scrutiny on the other: Is there a causal relationship present? Or are we merely observing correlations? Put differently: Is the art training the driving force behind the change in cognitive ability? Or are the (already) „smart“ people just more drawn to the arts?

While causal relations should be what the discussions revolves around, correlations are often misinterpreted as causal – the finding that children doing better at school live in homes with more books should not lead one to think that ones own kid’s grades could be improved by filling up the shelves.

But even if a causal relationship is rightly claimed as such, this might not yet guarantee fruitful research: Causation can be weak or strong. While “smoking causes cancer” or  “children taking arts training can improve cognitive scores” might be true cases of causation, they are so only in a rather weak sense: The latter statement doesn't tell us anything about a possible brain mechanism of learning that could suggest progress in understanding such mechanisms. Nor would we have found by what mechanisms the brain generalizes this learning, nor anything about possible critical periods of development where the brain might benefit from certain types of experience, nor… … …

Research that at least attempts to give a clearer answer to these questions is the three year long research collaboration of the Dana Consortium bringing together research from seven universities across the U.S., considering different kinds of art forms and/or different kinds of impacts on cognition. It becomes clear that complex hypotheses are necessary when tackling these questions. A good example is the paper of Posner et al., also presented in this volume :
“We hypothesized (...) that the brain network involved in executive attention and effortful control can be strengthened by specific learning. Moreover, we hypothesized that the enthusiasm that many young people have for music, art, and performance could provide a context for paying close attention. This motivation could, in turn, lead to improvement in the attention network, which would then generalize to a range of cognitive skills.”

This kind of research question clearly tries to avoid the possible flaws mentioned earlier, but it is also quite limited in scope - not to say that this is generally a bad thing… except maybe for writers of Pop-Sci-Articles and people who had hoped that their Wednesday evening drawing class would soon result in incredible smartness.