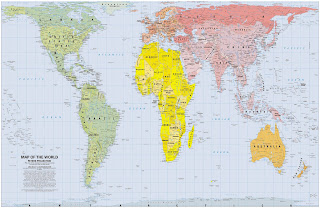 All previous posts seem to me brilliant in a sense that they involve spreading innovative ideas and evolutionary and state of the art research. While all of these are pretty, I was reading today of how 1.3 billion people in the world lack electricity and how nearly 40% of the world's population rely on wood, coal, charcoal or animal waste to cook, breathing in toxic smoke that causes lung disease and kills nearly two million people a year (i.e. more than AIDS: 1.8 million in 2010 and three times the number from malaria: 660,000 in 2010). [Engineering & Technology, volume 8, issue 3, April 2013]
This made me question about education and cognition in such environments.

While I wanted to give a survey of learning methods used in developing countries, I've mostly found studies that show factors that impair cognition in developing countries. These include poverty, malnutrition, poor health and unstimulating home environments. I've found a very interesting article here that shows the impact of these factors on cognition, reviewing the problem of loss of developmental potential in young children in developing countries. The authors first examine why early child development is important and then develop a method to estimate the numbers of children who fail to fulfill their developmental potential. Then they give an estimate of the loss of income attributed to poor child development.
For instance, the authors show in the figure below how many children are influenced by these factors across the world. 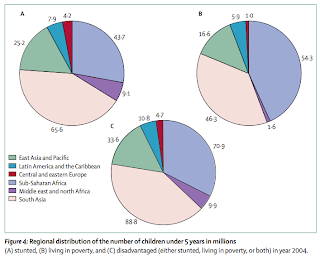 Their latest article from this series reviews existing interventions to avoid poor cognition and you can find it here.
I guess that my conclusion is that awareness is a bliss.