A World without Words 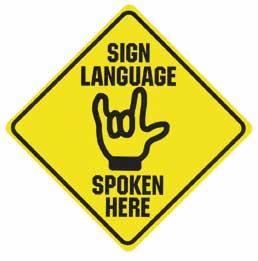 So much of what we have studied this year is bound to language. How humans communicate with each other and the world around them is fundamental to how we understand cognition. The role of language is central to almost everything we do, instead of “you are what you eat” it’s more a case of “you are your language”. Every debate we have had can be traced or linked to language; the mind-body problem, memory, problem-solving, visual perception, ...pretty much everything we share is recorded and communicated using language.  Wittgenstein said that the limits of language are the limits of our world while Ferdinand de Saussure said “Without language, thought is a vague, uncharted nebula.” Just the other day we saw how language develops in an infant through Deb Roy’s charting of the first years of his son’s life. At the other end of the spectrum, thinking about not having any language is beyond the imagination of most of us. The closest we can get is imagining stories of children raised by wolves like Romulus and Remus but even that is shrouded in mythology and supposition.

One woman who has experience of trying to communicate with those without language is Susan Schaller. An accident in her teens led to an interest in sign language and from there a lifelong study of deaf people, their language and how we all can learn from each other. Her most compelling story is that of Ildefonso, a Mexican immigrant she met at a community college class for the deaf in Southern California. As she tried to talk to him by signing, she realised that not only did he not know American Sign Language (ASL) but he did not know any language at all. He didn’t know there was such a thing as sound. Schaller realised that this was a highly intelligent young man who was trying to make sense of the world but who thought he was stupid because he didn’t seem to be able to do things as others did. Through a long and patient process, Schaller taught Ildefonso language for the first time. He learned that things have names and that he could use his hands to talk to people. In a fascinating conversation with Richard Whitakker which can be read here, Schaller describes the moment when Ildefonso finally understood that she was trying to show him that signs with her hands were describing objects:

“All of a sudden, this twenty-seven-year-old man - who, of course, had seen a wall and a door and a window before - started pointing to everything. He pointed to the table. He wanted me to sign table. He wanted the symbol. He wanted the name for table. And he wanted the symbol, the sign, for window.
The amazing thing is that the look on his face was as if he had never seen a window before. The window became a different thing with a symbol attached to it. But it's not just a symbol. It's a shared symbol. He can say "window" to someone else tomorrow who he hasn't even met yet! And they will know what a window is. There's something magical that happens between humans and symbols and the sharing of symbols.”

It seems as if Ildefonso was later reluctant to talk about his pre-linguistic understanding of the world, preferring instead to describe it as a time of darkness and then a time of light. He had lived and survived all those years without language, but not without thought. He was clearly an intelligent man who had made some kind of sense of the world around him. So even if his is a rare and unusual case history of someone without language, where does this example leave the relationship between language and thought which we all hold so dear? Perhaps Ildefonso’s  thoughts were closer to Saussure’s “uncharted nebula” than to the limited world Wittgenstein might  have afforded them. Either way, a captivating story.
Posted by Karen McCarthy at 11:35