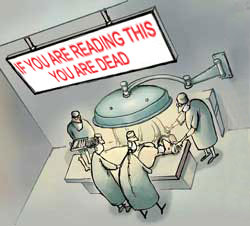 Ever wonder what happens to consciousness when we die? Until the advent of modern cardiopulmonary resuscitation (CPR) the answer seemed clear; the heart stopped beating, the lungs stopped working and blood could not reach the brain so it shut down. Consciousness shut down along with it.  But researchers are taking another look at consciousness during the time of clinical death. The website describes the initiative as “The Human Consciousness Project will conduct the world’s first large-scale scientific study of what happens when we die and the relationship between mind and brain during clinical death. The diverse expertise of the team ranges from cardiac arrest, near-death experiences, and neuroscience to neuroimaging, critical care, emergency medicine, immunology, molecular biology, mental health, and psychiatry.”

It seems clear that when the heart stops, so too does blood flow to the brain and if CPR is not performed, death will occur. When a patient is in cardiac arrest blood flow to the brain stops after approximately 10 seconds. However, Dr. Sam Parnia who is leading the AWARE Study as part of the Human Consciousness Project says that death is a process rather than a moment. Even after the heart has stopped,  brain cells do not appear to shut down for some time. This gives medical staff time to carry out CPR to keep the heart beating and blood flowing to vital organs including the brain. While brain activity has stopped, it appears that there may still be something going on in the minds of some patients.

Many people are brought back from the brink of death every day across the world and of those, depending on different studies, between 10 and 20% subsequently report experiences of hearing voices around them, of seeing and feeling things which seem incompatible with their physical state of being clinically dead. Stories of coming back from the dead have been fodder for magazines for years, indeed, when you type the word “near” into a Google search, near-death experiences comes up as the first suggestion. I would count myself as among the most skeptical of readers when I come across these accounts.

But these are precisely the moments under study by Dr. Parnia and his colleagues as he tries to redefine what we think of as the time of death and instead asks us to consider that consciousness may in fact continue for some time after a doctor has declared someone dead. If the electrochemical processes in the brain stop due to cardiac arrest, what explains the rich conscious experiences reported by so many patients who have been treated with CPR? What part of the brain, if any, is responsible? Nearly four hundred years after Descartes’ explanation of the mind body question, will this research bring us back to dualism? I’ll be watching with interest.

An interview with Dr. Parnia in Wired Magazine can be read here