My Body, Your Body, Whose Body?

Body perception is a popular topic of research at the moment.  From small regions in ‘high level’ visual parts of the brain that seem statistically more enthusiastic to see pictures of your body from allocentric visual perspectives than egocentric. To emotional bodies that can be perceived but not seen, to expert bodies and avatars. One of the underlying assumptions of some of the body perception research is that there is a neural representation of a ‘self' and an ‘other’. In visual perception, the body is often conceived as an object, a high level animate object, but an object nonetheless 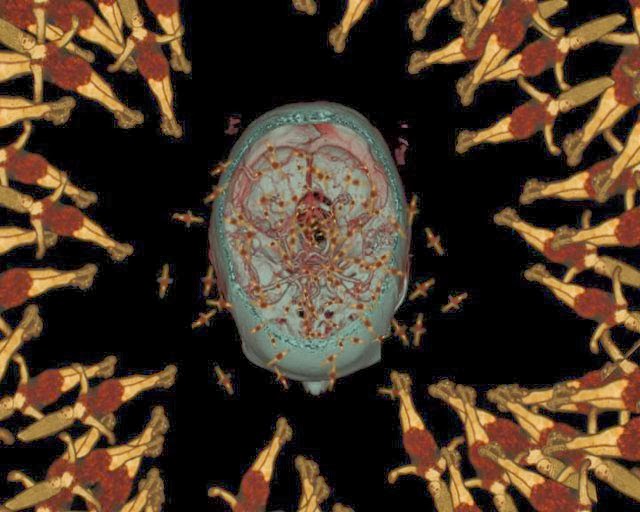 Interpretations of neuroimaging research, that have identified functionally distinct regions in the visual parts of the brain that respond selectively to faces and separately to headless bodies vary considerably. From the more functionally conservative interpretation; that these are groups of neurons that play some role in recognizing the human form, to the all inclusive accounts; that they are integral parts of a perception action system, and the more conceptually far reaching and exciting; they function to distinguish a ‘self ‘from an ‘other’. On all accounts the body is represented in the brain.

The Importance of Maps

Cognition and cognitive processes are complex terms. These terms serve as a genesis to a whole myriad of definitions and ideological constructs across, and between, the various neuro-orientated fields. Regardless of what stance you take on these ideals, the brain, as a neural entity, undoubtedly plays at least some role in cognition. Understanding the human brain and how the quintessential aspects of the human experience emerge from, or are influenced by this neural entity represents one of the most difficult and potentially rewarding aspects of modern science. 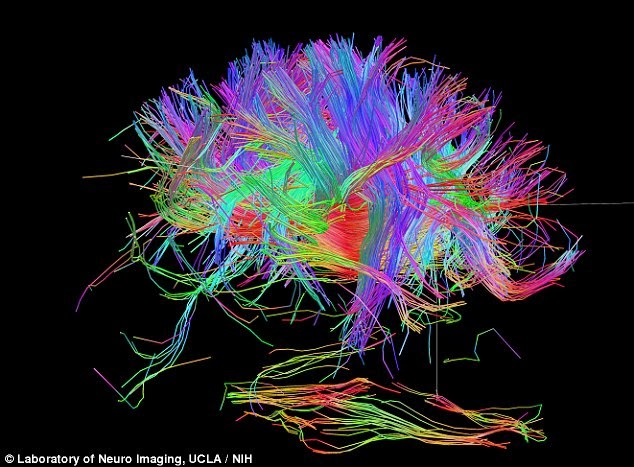 A field which typifies the brain-centric approach to cognition is the field of Connectionism. The Connectionist movement within Cognitive Science, broadly speaking, puts forth that the keys to the core aspects of the human experience lay hidden within the connections, and the unique connectome, that is present in each and all brains. Sebastian Seung in a recent TED talk offers an interesting conception of the human connectome when he speaks of how the connectome is the interplay of genetics and the environment: “I am my connectome!”

In the name of the Father, the Son, and the Disembodiment of Mind 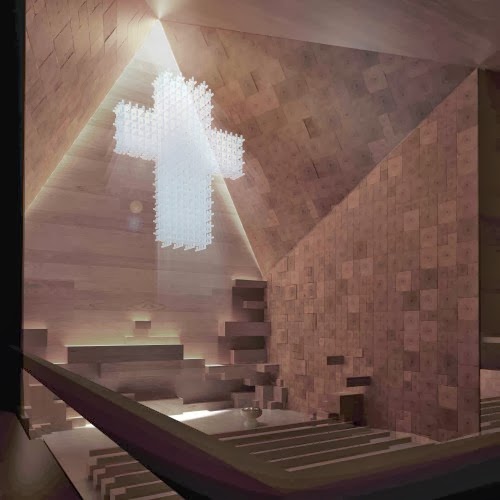 The beginnings of the modern Western fanaticism with the notion of the mind (and all its processes) as separate from the body is normally traced back to and vehemently pinned to 17th Century French philosopher Renee Descrates. His brand of property dualism was particularly strong in its insistence that consciousness was a thing above mere flesh and blood, and his ideas are seen as one of the most pervading influences on modern views in both philosophy and science. While I feel that this is in some ways beyond debate, as it has been acknowledged by many time and time again, there is an important source from which the disembodied mind could have got its first legs (apologies) which I believe is often overlooked.

The source of which I speak is the well known institution of Western Christianity, and the multiplicity of branches, churches, chapels and leaders which have kept it functioning throughout the Middle Ages right up to the today.
Read more »
Posted by Alan Doran at 19:26 3 comments:

In his book "The Wisdom of Crowds" James Suroweicki describes how the American Naturalist William Beebe came across an group of army ants moving in what is known as a circular mill. This occurs when the ants find themselves separated from the colony. Once an ant is lost, they adopt a single principle - follow the ant in front of you. In this case the circle was some 1,200 feet in circumference and the ants simply kept marching until they dropped dead.

Now ants are pretty smart creatures - when working in their colony they perform their tasks extremely efficiently and effectively without being explicitly told what to do. So what causes the circular mill? The secret to the ants success in a colony is also the secret to their downfall. Every thing the ant does depends on what the fellow ant does. They do not think independently.

Memory is fallible. Extensive research by Elizabeth Loftus illustrates how ineffectual people can be when it comes to recalling past events. Details of events can be obscured, omitted or altered. Additionally, this fragility ensures that memory is also very impressionable. People can be lead to recall scenarios in a certain way, and even entirely false memories can be assumed through suggestion alone.

A potent example of the extent of the suggestibility of memory is the epidemic of false memories that occurred in the 1990s, whereby a large number of psychiatric patients reported memories of abuse, abduction and other traumatic childhood events that, for the most part, never actually took place. The recollection of these events was considered to be spurred on by intimations made by professional caregivers who interpreted dreams and patient statements to be representative of repressed childhood events. In some cases these recovered memories were quite literally unbelievable and featured events of satanic ritual or alien abduction - an extreme example of just how prone to manipulation memory can be. 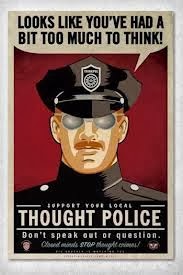 Orwell’s ‘Nineteen Eighty-four’, is possibly the best known dystopian novel (although largely a rehash of themes from the disgracefully overlooked ‘We’ by Yevgeny Zamyatin), with many of its terms entering the common lexical. Big Brother, Double-think, and perhaps to a lesser extent ‘Newspeak’, which was the language to replace Oldspeak (or standard English). This new language was designed with the intention of diminishing the range of thought of its speakers. It did so by limiting the words that a person could use, any words irrelevant to the ruling government ‘Ingsoc’ political doctrine were erased, it was all about reducing the vocabulary available to a person and in so doing limiting the range of thought available to them.  Many of the themes in Orwells novels did have a prophetic quality, such as the inherent flaws in Communism, the big-brother society and some would suggest we can now also include ‘newspeak’. Or should I say text-speak. R Shd I sa ‘txt spk’.

Dreams of a Different Kind 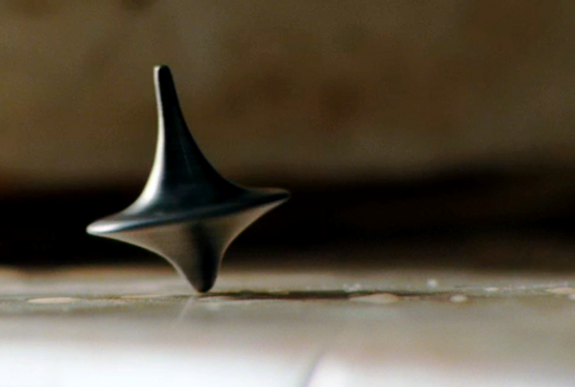 Lucid Dreaming is considered by many to be a desirable skill or hobby which is acquired through rigorous implementation of certain techniques, such as regular ‘reality checks’ (an act which distinguishes concretely whether one is dreaming or awake) or the daily recording of the events and themes of the previous nights dreams in a dedicated dream journal. It is described commonly as the act of dreaming while being fully aware that one is in a dream, with claims that this conscious state within the dream allows the dreamer to exert a degree of control over the dream itself. One of the most important facts for our purposes is that these dreams are said to be remembered as much as any normal experience the dreamer has when awake.

Putting aside the common criticism of this area, the fact that many believe that lucid dreams do not actually exist, and taking fully on board the idea that a person can have a fully conscious and memorable experience while completely asleep, we can ask direct our attentions towards embodiment, and the problem it is faced with by lucid dreamers.

The Chicken and Egg problem for Embodied Cognition

Embodied cognition is a broad school with numerous views on the body and its relationship with the mind, the body can be seen as a distributor, as a regulator or as a constraint. An important factor that seems to underpin this approach though, is that the mind and body should not be seen as distinct entities but as having a symbiotic relationship or indeed embodied. While this may be the case today, I think it is worth asking the question, which of these came first, our minds, our bodies or was it a case of co-evolution.


It was believed for a long time that co-evolution was the answer, that our bodies evolved in tune with our enhanced mental ability, for example we became bi-pedal, our hands were freed up and we began to use tools. Their always has been a strong focus on our, that is Homo-Sapiens, ability as tool makers. This ability was seen as our defining characteristic, serving as the tag-line to our species description, we were ‘Homo-Sapiens, the tool makers’. The importance attached to tool-making was probably due to the fact that when we look at our nearest relatives, the Apes, the main difference between our species and theirs is that we are bipedal and we use tools. It was then assumed, by Charles Darwin and others that the reason we became bi-pedal was to free up our hands so we could make and use tools, it all seemed so simple.
Read more »
Posted by Alan Groarke at 23:14 1 comment:

The Reflex Arc and Free Will

In his paper “The Reflex Arc Concept in Psychology”, Dewey states that the historical reality of the Reflex Arc as stimulus/sensation followed by cognitive idea followed by motor response is a defective, disjointed psychology. In discussion of Baldwin’s analysis of reactive consciousness Dewey summarises that “the conscious sensation of sound depends upon the motor response having already taken place; or in terms of the previous statement (if stimulus is used as a conscious fact, and not as a mere physical event) It is the motor response or attention which constitutes that, which finally becomes the stimulus to another act.

Lectures on Embodiment and Robotics 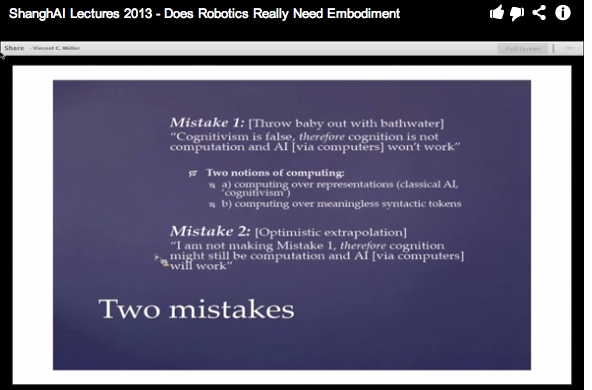 The ShanghAI lectures provide an open forum in which leading researchers in AI stream talks on current issues in artificial intelligence.

The third lecture series, the following talks are available for your enjoyment, and are relevant to this week's theme of embodiment:

Angelo Cangelosi talks on the topic of Cognition and embodiment – Language learning in children and robots: A developmental robotics approach.  He takes a developmental approach to robotics (and psychology) and offers a remarkable example of ‘synthetic methodology’ for the study of children’s intellectual development.