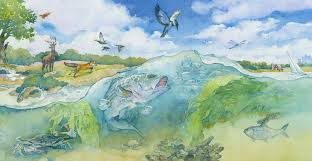 Embodiment may be considered as the role of the organisms specific physiological make up and its interaction with the world around it that decides its cognitive and experiential state. It is from this that the organisms sensorimotor system both influences and constrains the experiential life of the particular organism and which itself is situated within a larger environmental, biological and evolutionary context as such that “the organism both initiates and is shaped by the environment” (Varela, 1995). It is this embodied and participatory, enactive engagement with the world that allows for a "realm filled with purposeful striving, temporal flows, ambiguous moods, sense-making, bodily feeling...in a word our "erlebete", or lived existence" (Froese & De Paolo, 2011)


Agencies and entities are described as abstract entities by Varela (1995), from this it is unclear as to what may be considered here as constituting the agent self as also discussed is of what defines a particular experience within the enactive process as being physical or mental or cognitive is the “degree of significance” for the individual. The enactive, participatory role of the organism here is without doubt,  but where, or how, the experiential aspects of such an organism become differentiated into what may be, for want of a better term, particular personal experiences is not addressed. The use of terms such as distinct or differentiated is acknowledged as being problematic in such a context but it remains that organisms have particular experiential incidents throughout their existence and which are experienced, recollected and relived explicitly outside of any current or immediate, participatory environmental context.


The argument here is, arguably, related to the discussion of the existence of representative structures or processes within the cognitive system. It has been previously addressed as to whether a non-representationalist view of embodiment can account for all cognitive processes. Clark (1995), while fully acknowledging the vital role embodiment plays in cognitive practice, also argued that there remain some “representational hungry” aspects of thought which still requires some form of representation to remain.


Perhaps not, the positing of representations within the cognitive system remain theoretical constructs and perhaps ultimately non-verifiable, again if they indeed play any part within the embodied, or grounded perspectives. Barret (2015) discusses the negative implication of holding onto the traditional computational model of cognition to the exclusion of the consideration of the embodied and enactive agent within the environment. This approach had led to the bias of what was thought to be human cognitive functioning being imposed upon a plethora of non-human organisms aside from the lack of awareness of the explanatory power of the embodiment perspective and the sufficiency with which it allowed for the organism to negotiate its world. As such embodiment led to a much broader appreciation of the variety of ways in which individual species may interact and experience their own situatedness and offered a framework for doing so.


Barrett, L. (2015). Why Brains Are Not Computers, Why Behaviorism Is Not Satanism, and Why Dolphins Are Not Aquatic Apes. The Behavior Analyst, 1-15.

Embodied cognition as currently understood contends with the emergence of cognition as being grounded in an organism’s sensorimotor capacities and interaction with the environment. Wilson (2002) identifies six aspects of embodiment such that (1) Cognition is situated (2) Cognition is time pressured (3) Cognitive work is offloaded onto the environment (4) The environment is part of the cognitive system (5) Cognition is for action (6) Off-line cognition is body based. The variety of perspectives on embodiment differ between the degree of influence such sensorimotor interactions have on cognitive processes from the position of embodied cognition constraining internal representational cognitive processes to embodiment being treated as a continual dynamic system without the attribution of any internal representative structures or processes being required.

Lakoff (2015) in additional support of the necessity of the embodiment perspective, offers the assured consideration that if an individual's brain was, hypothetically, somehow disconnected from all sensorimotor functioning then, in the absence of such sensorimotor interaction, what would be left to think about? It is a practically impossible position to argue against and one which firmly, and quite directly, asserts the vital role which the body essentially plays in cognition. Each perspective assimilates the influence of embodiment and interaction in the cognitive process but with particular respect to the consideration of metaphor the particulars of the environment as being part of the cognitive system and that off-line cognition is body based may be particularly addressed.

The main question with regard to embodiment and metaphor is the question as to how, if all our concepts are grounded in our sensorimotor and environmental constraints, then how is the ability to abstract possible (Jamrozik, A, McQuire, M, Cardillo, E. R  & Chatterjee, A. 2016). For Lakoff and Johnson (1980) abstract concepts are intensely metaphorical in that they are based on the mapping of sensorimotor based concepts across and between distinct domains. To clarify, a concept is defined as (1) something conceived in the mind :  thought, notion and (2) : an abstract or generic idea generalized from particular instances the basic concepts of psychology the concept of gravity. The definition of a metaphor is (1)  a figure of speech in which a word or phrase literally denoting one kind of object or idea is used in place of another to suggest a likeness or analogy between them (as in drowning in money) and (2)  an object, activity, or idea treated as a metaphor.

Lakoff & Johnson (2003) state that the evidence for the role and interplay of concept and metaphor is based on linguistic examples. The “essence of a metaphor is understanding and experiencing one kind of (conceptual) thing in terms of another, that metaphor means metaphorical concept”. The crux here is that all of cognition, from the mundane to the highest of abstractions, may be accounted for in terms of such blending of sensorimotor conceptual experiences. It has previously been discussed that it follows from this that abstract concepts as such have no specific representation but rather are constituted from more direct and grounded sensorimotor domains (Jamrozik et al 2016). Other commentators have expressed concern that the history of such abstract metaphors is largely ignored and which may hold influence over how such abstractions are considered by successive generations. Bowers (2009) argues that such metaphors would have originated in earlier times and when passed on they continue to hold the errors and biases of previous thinkers.

Metaphor then is more than just a means of communication but rather is a way for individuals to manage and develop their cognitive and conceptual experiences as mitigated through their sensorimotor apparatus and environment. Given that cognition is so embodied there are there inherent limits on what we may cognize about? I think Lakoff & Johnson (2003) comes from an interesting philosophical perspective in this regard in that instead of engaging in the ambitious, but quite possibly fruitless, search for an absolute truth the focus, for Lakoff, remains on human experience and relative meaning. In this he is arguably acknowledging the presumed inherent limitation in what may be engaged with both ontologically and epistemologically given the constraints placed upon an organism by its physical system and the potential for engagement within the environment. If, as Lakoff argues, our conceptual system is strictly reliant on the use of metaphor it may then follow that any such attempt at a complete account of nature is unattainable. This position would arguably then appear to follow given the constant state of experiential flux we find ourselves in.

Bowers, C. A. (2009) Why the George Lakoff and Mark Johnson Theory of Metaphor is Inadequate for Addressing Cultural Issues Related to the Ecological Crises. Language & Ecology vol.2 no.4 (2009)

George Lakoff and Mark Johnsen (2003) Metaphors we live by. London: The University of Chicago press.