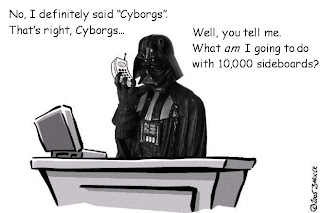 The augmentation of biology with technology is not a new concept—indeed such devices play an integral role in modern human existence. However, because these contraptions are external to cognitive systems, they are not utilized as efficiently as they could be. What if this limitation could be removed and cognition could be aided directly by technology? Kevin Warwick examined just this question in a set of experiments that has since been dubbed "Project Cyborg".


In the first phase of Project Cyborg, Warwick, now known as “Captain Cyborg”, received a RFID-transmitter implant in his arm that allowed him to control nearby doors, heaters, lights, and other computer-controlled devices.  The goal of this test was to determine: 1. if the body would accept or reject such an implant, and 2. if meaningful information could be sent from and received by the chip.

The next stage, another implantation, utilized a more complicated neural interface consisting of an internal electrode array containing 100 electrodes connected to an external “gauntlet” of electronics that contained supporting electronics. This transmitter successfully produced signals with enough detail that Warwick could remotely control a robotic arm with his thoughts. As one final test, Warwick’s nervous system was connected to the internet in an attempt to control the robotic arm, located at University of Reading in Berkshire, from his lab at Columbia University in New York—a task in which he succeeded.

Although this technology is still in its infancy, Warwick’s research presents astounding implications. Most obviously, such transmitters could eventually be used to allow amputees to control robotic replacement limbs using only their own thoughts. More abstractly, however, it offers the potential for communication between beings on a cognitive level. From empathy or telepathy to full-on mind control, the possibilities are endless. While admittedly primitive, Warwick’s results are promising, and indeed suggest it is possible.