The Cultural Influence of Perception 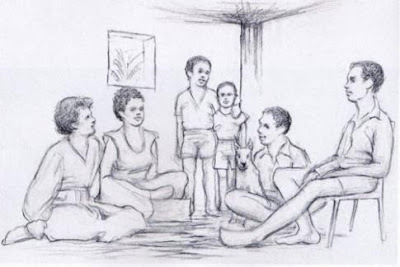 It may appear clear as day what image is being portrayed in the adjacent picture  but what you see here is very much a result of your cultural upbringing. Constraints of your physical environment have such a conditioning effect that you will assume that the image is of a white family sitting in a room near the corner. The animal is a dog and over the woman's head on the left is a window. However when this image is shown to someone in Africa , it is found that they see it as a black family sitting outdoors. The room corner is a tree and the window is an object being balanced on the woman's head.

This phenomenon  has been further explicated in a series of tests which examined the patterns of visual inference from a cross cultural test group. Experimenters tested the differences in perceptually processing geometric optical illusions. Illusions used included the Müller-Lyer Illusion (see below) and the Sander parallelogram illusions. For the Müller-Lyer Illusion the respondents were asked to indicate which line was longer. The answer of course being that all lines are the same length.

What was discovered is that tests taken by European and American test participants scored far lower for correct geometric spacial inference when asked. In other words the illusions worked more effectively on the Western samples.
The explanation for this phenomenon came in the form of the 'carpentered-world' hypothesis.This essentially recounts that Western people are immersed in a world of right angles (tables, books, corners of rooms). This environmental feature has left us with a certain heuristic tendency to mis-judge the dimensions of the lines seen in the illusion.
It seems that so much of what we consider as being universal is in fact quite the opposite. Taste in music, appreciation of art and familiarity for faces have all been proven to be based on nurture as well as nature. Or to put it another way experience has a profound often over-looked effect on our patterns of thought. Without indulging in further purple prose it seems appropriate to mention that perception in a learned trait and seeing, while universal, is not mutually exclusive with observing.