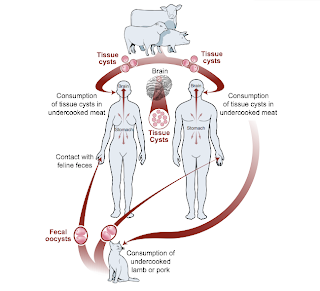 They are among us. They look just like us, but they are not just like us. They are hosts to the Invaders, beings who lodge themselves inside human brains, controlling behaviour for their own primordial ends. The elderly lady beside you on the bus who smells faintly of cat-pee and mothballs – she could be one of Them. The student behind you, snuffling loudly and popping another Panadol from the packet – is he one? The orange girl nattering into her mobile with one hand, plucking fine white hairs out of her scarf with the other – is it her? Indeed, given the statistics, the chances are that at least one member of the CogSci class is host to behaviour-modifying t.gondii oocysts. Even you, gentle reader, could be one of Them.

There are a number of parasite species which control the behaviour of their hosts (here are a few examples). The brain parasite toxoplasma gondii is one of the most famous, renowned for its capacity to make rodents fear cats less. T.gondii has evolved this capacity because it can only complete its life-cycle in the body of a cat; in other mammals it re-encysts, forming an oocyst in the host’s brain. In humans, the effect of toxoplasma oocysts include ‘increased intelligence, superego strength and affectothymia’ in women, and ‘decreased intelligence, superego strength and novelty seeking in men’ (Lafferty, 2006: 2749). Infection, in some parts of the world, is quite rampant, and some estimates suggest that up to half the global population is infected. For example, 25% of the Irish population are infected, and 38% of all UK meat products contain toxoplasma cysts. Infection occurs through consumption of contaminated meat products or contact with kitty poo, among other means. Initial symptoms are brief and flu-like, and then everything seems normal again. And as if the individual consequences weren’t creepy enough, this paper by Kevin Lafferty suggests that human cultures, and thus, we may infer, the course of history, have been altered by toxoplasma.

‘Culture’ is probably one of the most vaguely defined terms around; in fact, you could even say it rivals ‘cognition’. Despite this vagueness, one thing most people would probably be comfortable enough asserting is that human culture is an almost exclusively human product - it is something that arises out of our nature, our collective history, our relationship to the world around us and our relationships with others. However, according to Lafferty, toxoplasma gondii may actually have affected the way human cultures have developed through the aggregation at the ‘national level’ of toxoplasma-induced personality changes which occur at the individual level. Lafferty found that, in western countries, increased toxoplasma prevalence correlated with cultural ‘neuroticism, novelty-avoidance and masculine domination’. I am not deeply convinced of the worth of these rather crude ‘cultural dimensions’, which seem redolent of 1930’s ‘Culture and Personality’ school anthropology, and it is also worth emphasising that the correlations did not hold for non-western societies, leading Lafferty to conclude that if toxoplasma does have an effect at the cultural level, it is likely only a very limited one (Japan, for example, has very low toxoplasma prevalence but very high ‘novelty avoidance’). However, cognitively speaking, three central points remain of interest. One is the implication that personalities are the product, not just of human beings, but of other organisms acting through human beings. Another is the idea that personalities can aggregate into group-level traits, which are presumably self-reinforcing. Thus, we are robbed of our Lutheran atomism from above and below. The last is what toxoplasma infection says about our notions of being unified agents in possession of ‘free will’.

Philosopher Daniel Dennett here eloquently expounds his view that the brain is, in fact, a chaos of competing agencies; each neuron constitutes an agent in its own right, and each screams to be heard above the clamour of its brothers. This view dissolves the individual into a legion and could be accused of wiping away any hope of free will, but at least we can still say that the sub-agents are in some sense native components of ‘ourselves’. It is initially alarming but ultimately bearable. Indeed, the idea that our behaviour is influenced by hidden agencies beneath the level of our experience has become fairly widely accepted since Freud, and as for personal unity, the great 18th century philosopher Hume famously claimed that the self was nothing but a bundle of perceptions. However the thought that a significant percentage of us are actually composite beings whose behaviour is influenced by invasive organisms lodged within our brains, microscopic cat-poo puppet masters against whom even the most reflective of tinfoil hats can offer no protection, is far more chilling.
Posted by Hugh Turpin at 15:38