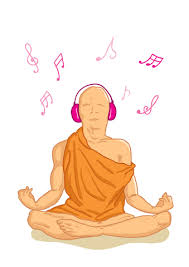 When I was reading about the Mozart effect in RLV Poehls earlier blog post I was reminded of a few pieces I had previously read on the effects of listening to Binaural beats. Binaural beats are a type of musical frequency which, when listened to through headphones send a different signal through each ear into your brain. These frequencies can be tailored to many different states but the desired result is to suggest a particular state to your brain. So for example a frequency of x hertz suggests to your brain that it is time to go to sleep. Many people use binaural beats as a lullaby in this way with many playlists on YouTube for this purpose and even several mobile phone apps on IPhone and Android.

In this 1998 paper Lane et al. say that when a listener is presented with two tones of a different frequency in each ear simultaneously, the listener actually hears "a single tone that varies in amplitude at a frequency equal to the frequency difference between the two tones, a perceptual phenomenon known as the binaural auditory beat." This study investigated the effects of binaural auditory beats in the EEG beta (16 & 24 Hz) and EEG theta/delta (1.5 & 4 Hz) range on a set of  29 participants. The subjects were asked to perform a visual vigilance task on three different days under the different conditions to see what effects there were on their performance and their mood when listening to the binaural beats in the background. The results suggested that binaural beats do have an effect on vigilance, performance and mood. The subjects performed better and had a more positive mood when listening to binaural beats (this effect was noted under both beta and theta/delta frequencies but was more pronounced under the beta frequency). This kind of work is interesting as it backs up a lot of the anecdotal evidence advocating the use of binaural beats as a kind of consciousness regulator. At the very least it seems possible for it to have some affect on regulation of mood and work performance. More recent work in this field can be found here and here.