"Rubber Hand" illusion could give prosthesis a sense of touch 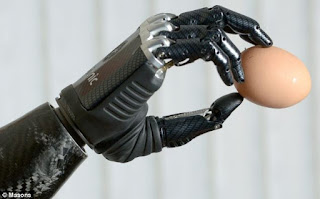 Merleau-Ponty said: "The body is the vehicle of being in the world, and having a body is, for a living creature, to be intervolved in a definite environment, to identify oneself with certain projects and be continually committed to them." The importance of this insight is that what makes a limb yours is not just it, but its involvement in "projects". These projects are the everyday activities in the context of the environment that your combined senses apprehend. You hear not only with your ears, but with your eyes too, as demonstrated by the McGurk effect. So too you feel with your eyes as in Botvinick & Cohen's "rubber hand" experiment. This one in particular has very real application in robotics.


The hand in particular is susceptible to illusion as a result of its high density of sensory nerve endings and its integration into your environment and projects. For example, if you take two boxes of different sizes and put a brick in each so that they weight approximately the same, pretty well anyone you ask to gauge the respective weights will tell you the bigger box is heavier. This of course has important implications for prosthesis as the grip and lift effort will be primed to be greater for the perceived heavier object. Assuming some integration between body and prosthesis the effect could be to crush a delicate object. Perceptual confusion isn't limited to visual integration, it can also occur when auditory signals get distorted as in the example of writing on a blackboard with a chalk, then doing the same exercise but wearing ear-plugs this time. Because the ear-plugs dampen the high frequency sound the effect is to perceive the blackboard as smoother, this is also known as the parchment-skin illusion where the skin can be made to feel smooth by distorting the frequency of the auditory feedback from rubbing hands.
Back to the rubber hand. Connecting a prosthesis to the nerve endings in the stub of the arm resulting from an amputation poses technical problems that need not be overcome. Instead Henrik Ehrsson, a cognitive neuroscientist at the Karolinska Institute in Stockholm, Sweden, tried the simpler alternative of the rubber hand to great effect. The stub of the hand of a number of volunteers was trained to feel like the rubber hand. This was so effective that the participants' skin conductance changed as they came out in a cold sweat at the thought of the pain of a syringe needle being jab into the rubber hand. The expectation is that as participants gain more experience they will become more sensitive and thus more effective in controlling the prosthesis. The limitations of illusion could be mitigated by some direct sensory integration between stub and prosthesis.
Posted by Unknown at 14:49