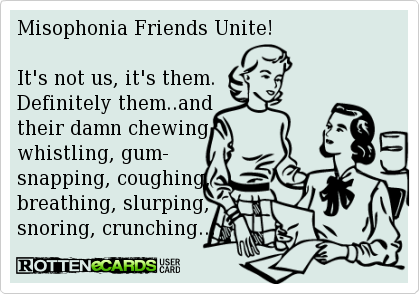 A good few years ago my cousin and I were chatting and the subject turned to tolerance of other people’s quirks and foibles. We were intrigued and amused to discover that we were very alike in our mutual irritation of the habits of our nearest and dearest. I asked her what exactly it was that drove her crazy about her husband and she said “When we’re watching television I just get so annoyed by, well, his breathing”. In a lightbulb-type moment, I knew exactly what she meant, having grown up with several family members who insisted on breathing too, an annoyance which would have me grinding my teeth in irritation! Luckily, neither of us is annoyed by our own breathing or chewing habits! We laughed it off and decided that we must have some kind of intolerance gene in common. Other than family members anyone I told the story to looked as if they thought I’d lost the plot entirely.

Fast-forward another few years and I notice that another family member seems unusually intolerant of the rest of us. When she sees someone tapping their foot or something moving out of the corner of her eye, she gets really annoyed and asks them repeatedly to stop. It irritates her no end that others put their feet up on the  footstool as they relax at home and absentmindedly rub their feet together. And, as in all the best families, one person’s annoyance becomes a neat weapon which another will happily use against them and so the battle lines are drawn.  I have some sympathy for her plight, it’s true her breathing does me in, but I’m a foot-rubber so we cancel each other out!

So, imagine my surprise to find a recent article in Psychology Today about a condition called Misophonia which describes perfectly the various intolerances of myself, the cousin and the youngest child. An apparently under-researched area, the article states that a recent study found that more than 50% of misophonia sufferers met the criteria for Obsessive Compulsive Disorder. However, having spent much of the past few months dissecting popular science articles, I have decided to take a skeptical view of that particular finding. It remains to be seen in further research what cognitive processes are at play here, but the 4-5% estimated to have misophonia symptoms has to be a conservative estimate, especially if my family are to go by!
Here is the link to the recent paper reported by the magazine.
In case anyone needs it, here is the link to a UK based support group, and there is even a Twitter hashtag if you're inclined to follow along #misophonia
Posted by Karen McCarthy at 15:52