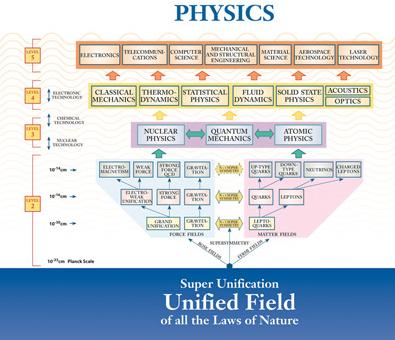 For long, scientists have held the belief that material entities, stars, planets, rocks,atoms, quarks are fundamentally different from the rather intangible aspects of our existence like, ideas, thoughts and consciousness. However, recent developments in theoretical physics, most notably Grand Unified Theory, String theory and quantum mechanics have brought those seemingly hippy ideas of 'oneness' into the realm of scientific inquiry. Since 1864, when Maxwell published a paper explaining the electromagnetic field which outlines the dynamic inter-relation between electricity and magnetism, which were then thought of as completely separate phenomenon, physicists have worked on trying to unify all observable phenomenon into a grand unified theory, or as it's popularly known, the 'Theory of everything'. While we are still far from developing that theory, work on it has sparked a number of questions which may very well hold the answer '42'.


The unified field from a physicists perspective, is the  unified source of all the diverse laws of nature that govern the universe.The picture above, shows a brief history of physics, in all it's emergent glory, emphasizing the hierarchical nature of our current level of material understanding. While probing the inner core of material entities the elementary, sub-nuclear particles were discovered. However, the elementary particles were not particles, but non-material, wholly conceptual entities. The quantum world was a world of pure potentiality — of probability waves evolving in accordance with the Schrödinger equation. More precisely, a quantum-mechanical system (e.g., an elementary particle) is a vector in a complex, infinite dimensional Hilbert Space. Beyond this abstract mathematical description, any attempt to impute material attributes to these “particles” is problematic, at best. If they were material particles, they would behave like material particles. They do not. A material particle cannot, for example, exist in multiple locations simultaneously. A material particle does not diffract and interfere with itself like a wave. And the properties of a material particle should not depend intimately upon the observer. Through the principle described above, classical, material behavior can be derived as the macroscopic limit of underlying quantum-mechanical principles. The converse is not the case: the deeper, more fundamental quantum-mechanical laws cannot be derived on the basis of classical constructs. It would seem that the abstract nature of the human mind is merely a reflection of the abstract nature of the universe itself at these fundamental scales or vice versa. Quantum mechanics dictates that the unified field is an infinitely dynamic non-material field and is seen as a purely self-referring, self-interacting field. This dynamic self-interaction leads to the sequential emergence of the increasingly diversified universe. Additionally, from a string theory perspective, this field can be thought of as the 10 dimensional realm of existence which gives rise to the infinitely varying strings, through self interaction. It is this self-interacting nature of the unified field which leads many to exaggeratedly dub it a self-aware field.

Consciousness however, is more difficult to chart out. One way to approach the subject would be by first discussing transcendental meditation. This meditative technique is a way to coerce the mind into progressively deeper states of consciousness, till the point where one is free of all thought, all sensation, all cognitive function and at a state of pure being. Pure abstract awareness. Various studies over the years have explored how transcendental meditation (TM) can affect a person's physical and biological state.

The question to address now is whether this state of awareness that lies at the root of our mental realm is infact the same thing as the unified field. To discuss it, i'll point out John Hagelin's video linked below where he illustrates the fascinating structural correspondence between the emergence of consciousness as per the Vedic literature and the emergence of physics when looked at from the frequency and vibrational perspective. While this correlation in itself may be intriguing, it still doesn't prove anything.

But, maybe a more 'scientific' approach would be more suited to provide evidence. Of the many studies done on this subject i found one study particularly fascinating. The field effects of consciousness, where a group of meditating individuals had a remarkable effect on the global scale. Like, one experiment in Washington, where a meditating group caused, within the span of  few weeks, a marked reduction in crime. So, while fascinating, how does this relate to our material world? Well, similar research has been done where tragedies in our material world, like the WTC collapse, caused a marked skew in the way computerized random number generators worked. Does that mean that the tragic, overwhelming change in the minds of the people who witnessed the horrific event had a tangible effect on the material world? Indeed it does, furthermore, by adding the TM study to this argument, we could say that the mental states of a group of people can have global consequences in both the tangible and intangible realms.

See, Global Consciousness Project, which has tried to see the effect of human thoughts on random number generators.