Meditate on this I will 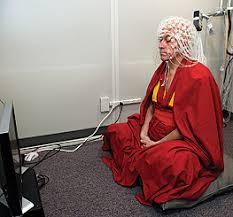 My last post on binaural beats got me thinking of something we touched upon when discussing the electroencephalograph (EEG) machine and methods last semester. The lecturer showed us slides of EEG readings from patients in various states and I remember being startled at one example where it was shown that an alert mind is in a beta frequency of 13 – 30 Hz but that some people who are awake can lower themselves into a theta frequency of only 4 – 8 Hz. This is a lower frequency of brain activity than that shown in daydreaming. The only instances where lower frequencies are recorded in the delta category of 1 – 3 Hz are when people are unconscious or in a deep sleep. The image below the break puts this in context.

I was fascinated at the fact that there was observable scientific measurements for what meditation does to the brain and that the effects of meditation can be so significant as to bring one close to the threshold of being ‘unconscious’ (that is unconscious according to neuroscientific criteria). This sparked my curiosity in meditation so I had a closer look at some contemporary work in the field.

This 2002 study put a group of 25 people into a clinical mindfulness meditation program for 8 weeks. The findings reported significantly higher left sided anterior activation in the brain and a boost in antibodies to influenza. On a practical level this was evidence that regular meditation demonstrated a significant and positive boost to the bodies’ immune system and brain function.

Similarly, this study documents how 22 subjects who suffered from anxiety and/or panic disorders (some of whom also had agoraphobia) were put under a group mindfulness meditation training program. Based on personal assessments and the assessments of therapists 20 of the 22 participants documented a significant decrease in their anxiety and depression both after completion of the program and on follow up 3 months later.

This kind of result is also seen in more obvious cases of physical pain such as in this earlier study on the effects of meditation on patients suffering from chronic pain. Here, 65% of chronic pain patients reported a greater than 33% reduction in pain and 50% reported a greater than 50% reduction in pain after having gone through a 10 week programme in mindfulness meditation. Previously I myself would have dismissed meditation and prayer as hocus-pocus and I think there are many more like me who still would. However, when faced with hard scientific evidence like the above studies it becomes hard to disregard the efficacy of meditation techniques.
Posted by Ruairí Henchy at 18:25