The Quanta of Mind 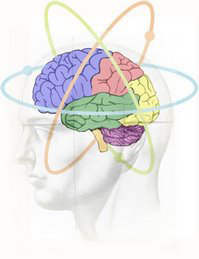 From where I'm standing, the sole feature drawing these seemingly disparate terms together is my own blissful ignorance of their precise meanings and applications.
However,  the first and fourth terms, Quantum Mechanics and Consciousness, some claim, have more linking them than their mere incomprehensibility.


How can quantum theory help us tackle consciousness? One mark in its favour is that it is at least a NEW approach, if nothing else.
Quantum Mind suggests that, as attempts to date to understand mind and consciousness have followed false trails and have failed to elucidate either of these terms satisfactorily, and as these trails all began with the Newtonian, experienced interpretation of the world, approaches grounded in a Newtonian view of the world (i.e. approaches that start by viewing neurons as massive objects interacting chemically and electrically) may mislead.
Nothing else has worked, the argument goes: coming at consciousness from the quantum angle, might be worth a spin.

The question remains, however, whether this heralds a useful development, or is simply a demonstration of the desperation of those who have struggled with consciousness.
Perhaps it is simply that the hope of ever constructively answering "What is consciousness?" is so low that we latch onto the nearest conveniently murky area that is jargon filled and complex just to occupy ourselves and keep the wolves from the door: this is one reason to regard the concatenation of two advancing realms of research with some caution sort of flailing should be regarded with caution.
Examining the contribution that a quantum examination of consciousness can make to our understanding, we should bear in mind that cutting edge scientific terminology is quite easy to abuse and misuse (as the use of the sexy scientific term that we're currently concerned with in an artistic project involving quantum sheep demonstrates).

Another question we can ask is whether taking the quantum on board on our voyages in the seas of consciousness is helpful. Can quanta help us explain consciousness in any constructive way?
Take this description of the useful role quantum mechanics might play in boosting understanding of consciousness, again lifted from Quantum Mind:
"The quanta... appear[s] to be the only level of the physical universe where it might be possible for science to insert consciousness as an additional fundamental property."

Is this invocation of quanta as a quality comparable to consciousness useful? Or is it just a fudge that does not in fact help us at all?

Certainly, my question "What is consciousness?" has not, for me, been usefully answered if the response is "Its a fundamental property just like the quanta."
Further reading may further enlighten however: I readily admit that personal unfamiliarity with the area is probably one of the principle reasons for this answer's lack of utility.
Quantum Theories of Consciousness might seem ineffable, but they at least represent a new sort of approach to one of the most vexing, divisive questions in cognitive discourse, deserving of further attention.

While ignorance may not be a virtue in itself, Socrates concluded that wisdom is knowing that you are ignorant.
Thus, on one count at least, in this realm of quantum minds, I seem to be ahead of the game.