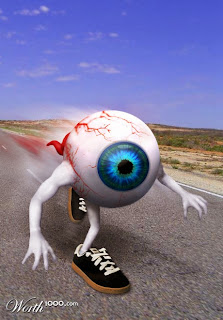 After discussing my previous post on the evidence of consciousness in sleep with some classmates I felt encouraged to look more deeply into the topic and particularly into dreams. Dreams really are a fascinating question, a largely unexplained and spectacular phenomenon that we each experience in our own way every night. So what can dreams tell us about the mind and consciousness? And where should we look for answers; are we better off going to a psychic or a neuroscientist?

This is a relatively old paper but it gives a good background into what we know about dreams today. Crick and Mitchison point out that our sleep consists of two main parts – REM sleep and non-REM sleep. My understanding of REM was limited to the band anda few of their hits but here are the basic details. REM (Rapid eye movement) sleep is common to all mammals (all that have been examined) and a human adult usually spends 1 and a half to 2 hours in REM sleep per night. REM dreams are much more vivid and are episodically illogical in comparison with non REM dreams. We also tend not to remember REM dreams unless we are woken up during the dream.

In REM sleep the head and neck muscles are much less relaxed than in non REM sleep and the eyes are active, moving rapidly in a way that resembles the waking state. If we are deprived of REM sleep for a night we typically have more REM sleep than usual the subsequent night(s). All of this indicates that REM sleep and the associated lucid dreams aren’t just some idiosyncrasy but that they must play an important role for mammals.

In their paper Crick and Mitchison put forward their theory that “we dream in order to forget”. They argue that this is done by a reverse learning mechanism which removes undesirable interactions between cells in the cerebral cortex. Thus somebody in REM sleep is better off not being woken up and remembering their dream. The evidence for the reverse learning mechanism is supported by work on problem solving methods in neural networks by Dr. John Hopfield (1). They posit that REM sleep is a kind of clean up mechanism that allows us to have such a highly refined neocortex. A breakdown in this system could be linked to schizophrenia. This is linked to the whole idea of someone going mad from lack of sleep.

This link between REM and schizophrenia is discussed further by Hobson and Voss in this 2011 paper. They are pretty sceptical about the link but do not rule out that it may have some validity.  They analyse all the other theories such as ‘REM dreaming helps us to live out repressive emotional states’ in a similar way, They say that sometimes dreams serve this or that function but really we have only known about REM sleep for fifty years and the theory that ‘we dream in order to wake up’ is equally valid. We are only now beginning to come to a coherent understanding of what REM sleep and dreams mean and hopefully new technological methods of research will yield some significant results in the short to medium term.