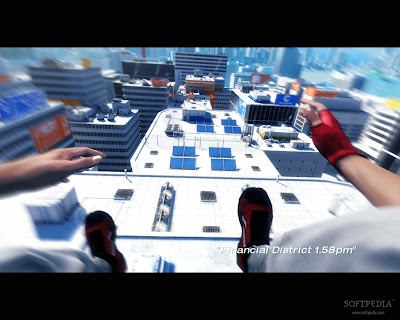 The issue of perspective is always a curious one. For those semi-familiar with video game technical jargon, the concept of first person shooter and third person shooter are fundamental to the over-all experience of the game. I always felt that the decision to place the camera behind James Bond instead of just in front of him determined whether the game would be enjoyable or just plain irritating. Imagine if you will the possibility of addressing this problem in relation to our own bodies.

The slightly paranormal view of an out of body experience is that of the rising from the body and floating around the room perhaps in response to great physical trauma or stress. Additionally, reports attribute them to the copious use of alcohol and mind expanding hallucinatory drugs.
Dr Henrik Ehrsson in Switzerland has found a means of replicating the out of body experience repeatedly, using virtual reality lenses which convince people that they are not where they are standing. Ehrsson gives people goggles which project the image captured by a video camera. The video camera however is positioned a few feet behind the person and is pointed at their back. Now what the person is experiencing is the feeling of looking at themselves. When they lift their arms, tilt their heads, they see it from a distance as if they were someone else.  When the experimenter stroked the volunteer’s backs with a pen, they reported the feeling coming from across the room on their virtual self.

To further push the boundaries of accepted sensory deception, people were shown the camera feed from the point of view placed on a mannequin which was looking down at its torso. Just by poking the test subject’s real stomach simultaneously with that of the mannequin a few times was often enough to create the illusion that it was their body. When the fake body was threatened with stabbing or hacking off of a limb, people began sweating and showed appropriate anxiety to threat. Even when the camera is attached to a Barbie doll, people still felt transported to a new body. Ehrsson himself said he felt like a child when looking at his tiny limbs compared to giants walking around him, especially when being picked up.

While this set of experiments may be dismissed as party tricks or just optical illusions taken to a new level, it is cognitively unsettling that we cannot know for sure where we are or even what appendages truly belong to us. Is my mind just accepting the illusion that I have a body because it has not yet been proven to be incorrect? Ehrsson has convinced amputees that they have their arms back by showing them an arm being stroked in concert with stimulation of appropriate nerve regions linked with phantom limb sensations. Without becoming too eccentric in my considerations, would it be possible to extend this line of thought and create the illusion of having wings, or a tail by stimulating nerves on the appropriate part of the body while observing the movement of a virtual limb? I know that Ehrsson believes that the future of this phenomenon lies with virtual reality gaming and controlling giant robots for construction. So long as the mind believes that the body is yours.