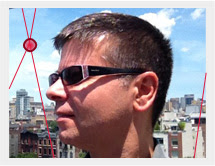 Technarte is an international conference on art and technology that has been taking place in Bilbao from 2006.  This year's offerings includes a piece on the dynamic visualization of the complexity of a city, a thousand years of performing robots, and audiovisual composition inspired by systemic biology.

Of most relevance to our concerns is a piece by Eduardo Miranda (pic left), who has obtained fMRI data from three people as they listened to Beethoven's 7th symphony.  He describes it thus:

"Currently, I am deconstructing Beethoven’s movement to its essential elements with the aid of bespoke Artificial Intelligence (AI) and storing them together with statistical information about Beethoven’s compositional decisions.

For the composition of Symphony of Minds Listening I plan to re-assemble these elements following to a method of my own, which uses fMRI information to guide the process. The original material will be modified according to a number of musical operations, also guided by fMRI information. The brain activity of 3 different minds listening to Beethoven’s music will yield 3 movements of the composition, some of which may bear more resemblance to the original Beethoven movement than others. The respective brain scans will be rendered into a movie showing the brain activity of the three persons, which can be screened during the concert."

Eduardo's personal home page is here. The BBC did an interview with him to find out more about the motivation for this peculiar form of music.
Posted by Fred at 14:03