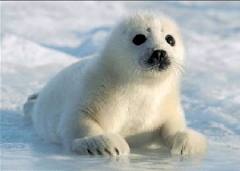 In attempting to take a closer look at extended cognition, I went off on a tangent when I found a report on a documentary about a robot which is being used to aid treatment with dementia patients in several countries. Paro is a personal robot developed in Japan by Takanori Shibata in the early 1990’s. A baby harp seal with soft white anti-bacterial fur, huge dark eyes and long eyelashes he is designed to interact with and respond to five areas of sensory stimulation. Unlike a real baby seal, Paro is diurnal so that he is ‘awake’ at the same time as the humans who interact with him. He responds to touch, light, sound, temperature and posture and his battery recharger is designed to look like a baby’s pacifier. He can turn his head in the direction of a voice, move his flippers, bat his eyelashes, squeeze his big eyes shut when he is stroked gently and his body temperature is always warm. All in all he is, as they say in Japan “Kawaii!”...irresistibly cute!
Designed for therapeutic use with dementia patients, a harp seal was chosen because it is not as familiar an animal as a dog or a cat and yet is very appealing. Robotic dogs and cats soon fall short of our expectations, as do humanoid robots, but we don’t know much about baby harp seals other than their ‘cuteness’ so we are more willing to accept the interactive capabilities given to them by the designer. Usually used in elder-care setting such as nursing homes, little Paro responds to being cuddled and stroked by patients and remembers what he did to elicit a positive response from the patient so he can repeat the action. His role is to improve the socialization and psychological well-being of patients, trigger emotional attachment and aid relaxation.


Recently in Dublin’s Science Gallery there was a showing of a film made by German documentary filmmaker Annette Wagner about Paro. Called “Squeeze Me” it examines the question of whether therapeutic robots can or should be used in geriatric care. You can see a preview of her film here. Paro has had mixed success in care settings, with some countries such as Denmark embracing the little guy more readily than others, but controversy has hovered over the use of such devices and their real value. Several advocacy groups for older people say that giving dementia patients a robot to play with while the humans run about cleaning and cooking defeats the purpose of ‘caring’ for older people who can no longer do so for themselves. Others think giving our elderly parents and grandparents a robot instead of our time is a lazy way out of our commitment to them in their later years.

So what is it that makes some of us feel so uncomfortable about the idea of dementia or other patients developing an emotional relationship with a robot? Why does the idea that we can ‘trick’ our ageing relatives into interacting with a non-human object make some of us feel uneasy? Is it because we might feel we are abandoning them to ‘machines’ when it is we who should be talking to them, hugging them and holding their hands? As humans we place so much of who we are in what we remember and how we interact with others, that when dementia takes that away, we are sometimes at a loss to define the person left behind. Who are they anymore if they can’t remember their own children, or what they worked at all their lives? What part of them does a robot like Paro reach and what kind of cognitive process is going on when they hold and talk to him? Could Paro be a form of extended cognition for dementia patients by stimulating something in their brain process which everyday interaction with their environment cannot do? Could we ourselves be part of our relative's extended cognition if we evoke in them a memory or a thought as we hold their hand or chat to them? As with most of my investigations into these matters, I have ended up once again with no answers, only more questions!
Posted by Karen McCarthy at 11:59