For Harmony and Strength? Thoughts on Joint Action in Japan. 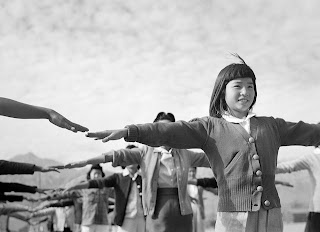 Wa, meaning ‘harmony’, is fundamental to Japan’s national self-image. Over the course of the twentieth century, Japan has been portrayed again and again as a particularly harmonious and ordered society. The Japanese are often said to have an elevated tendency towards group identification, willingness to self-sacrifice for group interests, and conformity – indeed, these are repeatedly emphasised as being central to the national character in Japan’s endlessly proliferating Nihonjinron literature (Nihonjinron refers to the body of ideologically motivated academic literature on the uniqueness of Japan’s society and culture. This literature generally features a homogenised picture of Japanese society set up in binary opposition to an individualistic West). Two classic formulations of these ideas were the social anthropologist Nakane Chie’s Japanese Society (1970), in which she proposed that Japanese society was vertically stratified according to company affiliation and loyalty to one’s immediate in-group as opposed to horizontally stratified according to socio-economic class, and psychologist Takeo Doi’s Anatomy of Dependence (1971), wherein he suggested that amae, a kind of paternalistic exchange of protection and indulgence in return for loyalty, constituted the glue that bound Japanese society together.

There is much debate about whether groupism, conformity and the currently-crumbling ‘company as family’ as they exist today really emerged naturally from age-old aspects of Japanese culture or whether these themes were selected and deliberately emphasised by industrialists and politicians when the original, Dickensian aspect of Japan’s industrial transformation began to become counterproductive as skilled workers became able to sell their labour to the highest bidder in the late Meiji period. However, whatever the case, no-one who has been to Japan today could come away unimpressed by the high level of dedication, conformity and group commitment on view, and the question becomes one of what mechanisms lie behind these features. There are probably a great number of ways Japanese group-identification is fostered, but one of them certainly seems to be the use of synchrony and joint action. Indeed, if one wanted to understand the cognitive effects of repeated synchronised activity, Japan would be the ideal place to start looking.

Synchronised ritualistic group activity is all over the place in Japan, from playschools to baseball teams to enormous girl groups like AKB48 whose synchronised routines are eagerly aped by groups of teenagers. It starts early – I remember reading an anecdote somewhere about a foreigner who sent his child to a Japanese pre-school, only to be chastised because his child insisted on running counter clockwise during break time, as opposed to clockwise as the children were encouraged to do. However, I would like to focus here on the Japanese Company. Company members are frequently expected to perform callisthenic exercises together before and after work, and these are often accompanied by moralistic, brow-beating speeches from the boss, as discussed in this video posted on YouTube by an awestruck gaijin. Corporations in Japan also frequently make use of ‘company hymns’ which must be sung en masse during salient moments such as initiation ceremonies for new recruits (here is a link to Yamaha’s Corporate Hymn, which I hope you will all be downloading onto your I-pods). The lyrics to these hymns generally involve themes of unity, loyalty, the benevolence of the company, and communal aspiration, as in the following (which I reproduce in full because I love it so much), taken from Rohlen’s classic ethnography For Harmony and Strength (1974), which concerns itself with Uedagin, a Japanese bank:

A falcon pierces the clouds
A bright dawn is now breaking.
The precious flower of our unity
Blossoms here.
Uedagin Uedagin
Our pride in her name ever grows.

Smiling in our hearts with glory,
For we carry the responsibility for tomorrow’s
Independent Japan.
Our towns and villages prosper
Under our banner of idealism raised on high.
Uedagin Uedagin
Our hopes are inspired by her name.

One can only imagine the cognitive effects of regularly intoning corporate ideology together to the jaunty accompaniment of a Yamaha electric piano. Though it could always be argued that they are an expression of group identification rather than a cause, I find it difficult to imagine that these forms of synchronised behaviour would have proliferated in Japan if they were not effective at producing a socially and economically useful dissolution of individuality. Although this prevalent use of synchronised tropes to ratchet up group identification can seem highly exploitative, I must say that I for one love the sense of group identity in Japan, even though I wouldn’t like to share in it myself (because I am an atomised cultural Lutheran at heart). Beyond this, synchrony is engaged in voluntarily, for pleasure, just as frequently as it is imposed from above. There seems to be a genuine love in Japan of doing things at the same time. However, there is another side to all this.

Japan is famous for the difficulty outsiders face in attempts to integrate, and the fact that its society is segmented up into a bewildering array of in-groups which are very difficult to penetrate. The uchi/soto division (literally ‘our house/outside’, meaning, essentially, in-group/out-group) is an enormous feature of Japanese society. It is worth speculating on the role of synchronised activities as one tool among many which facillitates the fractioning of society into this myriad of enclosed in-groups. It is also worth pondering how the exclusive nature of Japanese identity is formed at a national level. Though there is no doubt that cultural nationalism is actively promulgated by some government ministries and elements of the bureaucracy, the highly scripted nature of social interaction in Japan, where even the most mundane of daily interactions must be accompanied by set phrases which do not permit much error and must be varied in accordance with subtle hierarchical distinctions, and also the prevalence of finely tuned embodied expressions of Japanese enculturation (subtle levels of bowing and so on), must also contribute to the emergence of a formidably self-enclosed society with very high boundaries around membership. In other words, there must be underlying reasons why ideas of Japanese uniqueness and exceptionalism are so perenially popular.

However, I make no claims that any of this is any worse or better than a notion of society as an open body of enclosed, self-interested individuals.
Posted by Hugh Turpin at 14:20