Synchrony of Brains and Bodies 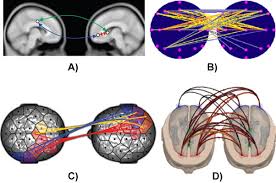 Riitta Hari and colleagues have a new and short piece in Trends in Cognitive Sciences entitled "Synchrony of brains and bodies during implicit interpersonal interaction".   It summarises a behavioral and EEG study [1] that looked at coordination within and across subjects.  The task is a simple mirroring task in which participants point in synchrony within a small area.  Interestingly, in the EEG data, they found


"intersubject behavioral synchronization (that was increased after the training task) was associated with increased inter-brain, but not intra-brain, phase locking in the theta (4–7.5 Hz) and beta (12–30 Hz) bands."


This adds to the growing number of studies in the red hot emerging field of social neuroscience that looks at brains in real-time social interaction.  A lengthy position paper by Schilbach, called "Towards a Second Person Neuroscience" will appear shortly in Behavioral and Brain Sciences. You can read it here.  The Hari paper provides other references. Uri Hasson has done some particularly interesting work in this area.  As methods for the simultaneous imaging of multiple subjects become more widespread, expect this field to explode.

The above image comes from a review of hyperscanning methods within social neuroscience.