Embodiment and 'The Hard Problem' 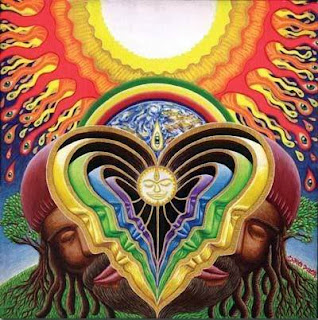 First off, I apologise for the corny picture. I could not resist. Consciousness is a good topic for these things. It’s mysterious still, an undiscovered country, theoretically up for grabs and thus ripe for colonisation by idiosyncratic, metaphysically consoling worldviews lending themselves to expression in gauche pictures. Why not celebrate that a little? Now, on to the post.

Chalmers (1996) offers a particularly simple critique against all current theories purporting to explain either the function or cause of conscious experience. This is the ‘in the dark’ problem – essentially, there is nothing about consciousness that makes it necessary. The logical possibility exists of a world identical to our own but populated by experience-free zombies. At the level of current theories, this is devastating. For example, Baars (1988) suggests consciousness is a global workspace, a system for the communication of information between separate agencies within the brain. But why should this intra-brain communication produce the phenomenon of conscious experience? Can’t intra-brain communication go on in experiential darkness? This criticism can be rinsed and repeated for every mainstream theory of consciousness I can think of. If we momentarily limit the scope of the critique to the orthodox position of the mind as an enclosed, information-processing system, there seems to be no necessary connection between the processing of information and the genesis of experience. What, then, about embodied theories? Does embodiment necessitate conscious experience in a way that information-processing does not, and can it thereby approach ‘the Hard Problem’ of explaining why we have experience in a more fruitful manner?

In this sympathetic commentary on Evan Thompson’s Mind in Life (2007), philosopher Charles Siewert lays out the basics of the embodied response to Chalmers-style Zombie arguments. Drawing on Husserl and Merleau-Ponty, Thompson claims that because objects achieve their perceptual unity through our bodily experience of them from a variety of perspectives, a functionally equivalent Zombie world could not exist. We understand the world and thus successfully interact with it precisely because we have individuated objects within it by experiencing them from a multiplicity of different points in space and time. Embodiment produces experience and experience is necessary for action. But still, why do we need experience for this exactly, rather than just detection? Would sensory detection in the absence of personal phenomenal experience not suffice?

Andy Clark (of extended cognition fame), in this 2002 overview of theories of visual consciousness, initially focuses on such phenomena as change blindness to illustrate the inaccurate nature of our perception of the world. This leads him to contrast a number of theories, among them one representationalist and one embodied. He dubs the representationalist theory ‘The Grand Illusion’, the idea that we have a rich but flawed internal representation of the world. The embodied theory, namely Skill Theory (Noe and O’Regan), proposes that we have no such rich inner representation. ‘The world is its own best model’, and rather than constructing an internal representation, the world ‘out there’ forms a consistent, external source of memory which we consult through ocular saccades to the relevant point in the visual field. Consciousness bleeds out into the world and both constitutes and is constituted by it. Interestingly, Clark, usually a committed post-cognitivist, adopts what looks like a compromise position here because he feels that positions such as Noe and O’Regan’s disregard the Hard Problem. If Noe were correct, then current generation robots capable of making rudimentary environmental discriminations would by necessity have a basic form of conscious experience. Clark feels this stance arises due to ‘sensorimotor chauvinism’ and exhorts us to take note of the fact that neurologists have identified two visual pathways, the dorsal and ventral stream. Clark seems to imply that consciousness should be associated with the latter, and is a process of projecting our ‘interests and concerns’ (these terms remain somewhat vague) onto the world for the purpose of complex direction of future action. Visual consciousness is the construction of a world which we can think with and should not be over-associated with direct sensorimotor causes. Here, Clark seems to be aligning with Higher Order Theories of consciousness as put forth by David Rosenthal; fine-grained concepts produce fine-grained conscious experiences. This seems a very representationalist stance for a post-cognitivist. Does the Hard Problem force a certain degree of back-tracking on embodied theories, as Clark suggests, or has he just been hanging round with Chalmers too much and thus formed an overly daunting impression of the explanatory gap?

In this paper, Jesse Prinz characterises positions such as Noe and O’Regan’s (and presumably Thompson’s as well) as maintaining that in the absence of bodily interaction with the world, consciousness could not exist. Brains in vats would thus have no conscious experience. Prinz provides a variety of objections to this strong stance (such as that people can hallucinate without physical interaction with the world, or have elaborate conscious experiences while inside sensory deprivation chambers, a kind of voluntarily-endured short-term human equivalent of Harry Harlow’s Pit of Despair). He ends up endorsing a moderate view of embodied consciousness, suggesting that such higher-order, secondary phenomena as self-consciousness and the perception of unity and ownership of action may rely on embodiment, but consciousness could exist without it. In this way, he seems to come to conclusions which are comparable to Clark’s. Consciousness is a top-down, higher order product as opposed to something that arises out of our sensorimotor system. A very different view is put forward briefly in this blog post, which outlines the position of Ed Slingerland, someone who sees an embodied approach as providing a way between the rival pratfalls of objective realism and postmodernism as we attempt to explain human experience.

Unsurprisingly, I don’t have the answer to the Hard Problem myself. I am unsure as to whether cognitivist or strongly embodied theories provide the better approach towards either answering or successfully dissolving it.
Posted by Hugh Turpin at 15:44