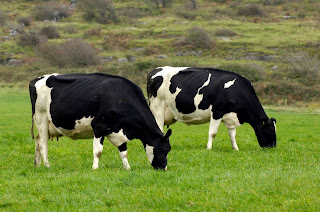 "Consider the cattle, grazing as they pass you by" is the famous beginning of Friedrich Nietzsche's "On the Uses and Disadvantages of History for Life." This meditation, published in Nietzsche's Untimely Meditations, takes the first few paragraphs to notice, not without despair, how the cows are completely absorbed in every present moment. Though this way of being, this Umwelt, is in our eyes more restrictive, for the cows it is in accordance with their being, and man "cannot help envying them their happiness - what they have, a life neither bored nor painful, is precisely what he wants, yet he cannot have it because he refuses to be like an animal" (Untimely Meditations, 60). Nietzsche derives many speculations from this observation, but our point of interest here is in the substantially different kind of Umwelt Nietzsche intuits between himself and the cows.


In his book Instinctive Behavior, Jakob von Uexküll writes expansively on the Umwelt, or a phenomenal/self-world. For von Uexküll, the Umwelt is akin to every organism existing within a soap bubble that is our understanding of all perceptual signs, including time and space. Furthermore, for von Uexküll this metaphor applies just as well to animals as to humans and von Uexküll, having painted an image of a world with every subjectivity existing within a perceptual soap bubble, asserts that "there is no space independent of subjects" (Instinctive Behavior, 29). However, this portrait of man's subjectivity not only makes a mockery of Nietzsche's anxiety, but alienates someone who would have otherwise been a staunch supporter of such a philosophy: Maurice Merleau-Ponty.


Merleau-Ponty, known for his intricate and yet remarkably experientially grounded philosophy of the body, agrees with von Uexküll that every perceptual being understands the world through an Umwelt. However, Merleau-Ponty makes a key distinction between man and animal that von Uexküll misses. In Phenomenology of Perception, Merleau-Ponty writes that man "has not merely a milieu (Umwelt), but also a world (Welt)" and he goes on to say, "if man is not to be enclosed within the envelope of the syncretic milieu in which the animal lives as if in a state of ecstasy, if he is to be conscious of a world as the common reason of all milieus and as the theater of all behaviors, then a distance between himself and that which solicits his action must be established" (Phenomenology of Perception, 89). For Merleau-Ponty, there is a world outside of subjectivity that is understood through subjectivity, and man's uniquely integral capacity to see the Umwelt rather than have it overwhelm the totality of his being is a crucial distinction between man and animal and a crucial aspect in man's phenomenology of perception (Phenomenology of Perception, 89).

Nietzsche and Merleau-Ponty are equally keyed into this distinction, though Nietzsche sees it, at least instinctively, as an entrapment and Merleau-Ponty frames the distinction as a possibility for freedom. Nevertheless, both men stand in contrast to von Uexküll, whose theory faces setbacks when it comes to man's insatiable urge to understand the world.
Posted by Mary Joan Stevenson at 15:24