But is the spanner conscious? 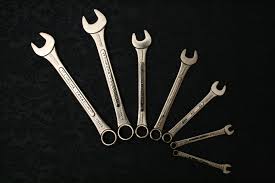 Some cognitive scientists and their good friends in the philosophy of mind arena are concerned with working towards a satisfactory definition of “cognition”. There is a long way to go. Here is a short examination of a small part of the Extended Mind Theory Andy Clark and David Chalmers presented in 1998. (Here is the full text.)

There is some kind of connection that happens when you use a tool—the right tool for the job: a well-honed axe will split a chuck of hard maple like a knife through butter. You can feel the task, the job the “thing that needs to happen”, happening as you use it.

People who use tools develop relationships with them: some would go so far as to say they can only do what is needed by using a particular tool. A mechanic has a favorite spanner. When he uses it he can feel the right torque—just the exact turning for the exact bolt which will perform the exact job for which is was designed. He feels it—the rightness-- through his fingers. The spanner is a metal object physically between his fingers and the bolt, yet it becomes (an extension of?) his fingers and so he can feel the bolt, and feel from the bolt what is the correct turn of the spanner.

A driver knows her car. What the tires can, and cannot handle, which way she needs to turn the steering wheel when the tires hit a patch of ice, how fast she can take the curve, exactly how much to push down on the brake pedal. She knows when to slam on the brakes, and when just lifting her foot off the accelerator is enough to slow the car. She “knows her machine.” She feels the road. The tool is superbly designed to its use. And she uses her body—feet, hands, eyes, ears, head—to accomplish the task via the tool. We do this in countless ways every day. We use objects to accomplish tasks. Does this necessitate or even suggest that the tools we use are imbued with consciousness? Are they merely conduits of our mental energy or are they, themselves, a small piece of mind?1 Clark and Chalmers (C & C) side step the question of whether the tool itself exhibits cognition, thus avoiding accusations of panpsychism, and name the relationship between a person and a tool as a system. (Note that Chalmers has gone on record as a panpsychist, and that point of view cannot be ignored, but I beg you to hold that in abeyance for this discussion.)

What is interesting is the “kind of connection” that happens between the hand and the object being worked on, mitigated and facilitated by the tool in-between. Clark and Chalmers would have this “kind of connection” be a mind.  They postulate that in the case of a human using a tool a kind of linkage--what they call “a coupled system”-- is created. And, they claim, this coupled system can and should be seen as a cognitive system in “its own right” (p. 10). This simple statement elicits a whole world of emotional responses-- more than I chose to address in this post.

In the forgoing examples, I use “tool” to mean a physical object or even a technology which is utilized by a human to accomplish a task, and that is required for the task. I leave aside, for the moment, the way C & C extend the definition of tool to include language. What is the relationship between a worker and her tools? Can the mechanic use a different type of tool or even a different particular spanner to accomplish the same task? Perhaps, but it might not work as well, or be as satisfactory to the mechanic himself. It might feel “off” or just not right. Does a coupled system develop between a driver and her car? “All the components in the system play an active causal role, and they jointly govern behavior in the same sort of way that cognition usually does. If we remove the external component the system’s behavioral competence will drop” (p.10). Certainly if we remove the engine, the wheels, or even the driver’s seat, the performance of the driver-car unit will drop, indeed might become null. That coupled systems exist seems unarguable. But do such systems exhibit cognition?  Cognitive scientists tend to shy away from using the term consciousness, but I’d like to tweak their beards a bit and introduce it here.

If I replace the word “cognition” with “conscious”, I respond with an unequivocal “No, the coupled system is not self aware, is not capable of intrinsic movement, has no soul, is not sentient.”  But C & C want to spread the epistemic credit around. They want to be sure that epistemic actions (those which “alter the world so as to aid and augment cognitive processes…” (p.9) contrasted with pragmatic actions which only alter the world in a physical manner) are covered in the definition of cognitive processes. The external relationships which arise and form a system are, by their reasoning not in the head but are still cognition. How are these not “in the head”?  Are not these systems perceived or even birthed in mental ways? Let me touch one. Let me see one. Let me taste or hear a coupled system, and I will agree that they are external to my perceiving apparatus. (I go so far as to say, “Let me use my sense organs to ascertain the “real-ness” of the system!) Back we go to not having a satisfactory definition of cognition.

A theory of mind requires certain elements. According to Seager (1995), such a theory ought to provide answers to these questions:
1. What is consciousness?
2. Who/what in the world possesses it?
3. How can we tell who/what possesses it?
4. How does it arise in the physical world?

1. The expression, “I’ll give him a piece of my mind!” meaning to tick someone off, is an interesting example of how the term “Mind” gets tossed about frivolously. Does the speaker actually mean to give him some kind of tangible thing/object that is part of her consciousness? Is a proper ticking off – the action itself, or the content of the words used to tick off,  a “piece of mind”?