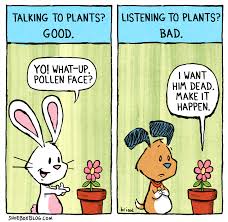 'The Happening' is possibly the worse film, I have ever seen at the cinema. The story-line, without giving away too many plot spoilers, is that the trees,decide that they have had enough of humankind pushing them around and destroying the ecosystem, so they decide to fight back. This fight back involves the releasing of a neurotoxin that induces people to immediately commit suicide, so long periods of the film involve people running away from trees. It is dross. But what about the science behind this idea, that plants can identify humans as guilty of crimes against the environment and so pass sentence on them, that too is dross. But the notion that plants communicate with one another and release chemicals, that does hold some truth. The issue though, is that if this could be considered sufficient to say that the plants are intelligent?

Daniel Chamovitz has argued that not alone can plants see, smell and feel, but they can react to threats, communicates with its neighbours and some plants have a memory. The key to the veracity of this statement is how freely, one interprets terms such as ‘smell’ and ‘communicate’. The sense of smell of plants can be seen with ripening fruits, a ripe fruit releases a ripening pheromone, called ethylene, into the air, which is sensed by neighbouring fruits, so that entire trees and orchards will ripen in synchrony. In regards to communication, the plant behaviour would seem to require a broad definition of the term, if a plant is attacked by an insect or animal, it realises a pheromone which alerts neighbouring plants, who generally respond by emitting a chemical which makes them less savoury to the aggressor or else attracts the predators to their predator. The argument for plant memory, isn’t as incredulous as may first seem, if memory is accepted as encoding information, storing information and retrieving information, then plants such as the Venus flytrap, which must have two of its hairs touched before it snaps shut, can be considered to have a memory. In the case of the Venus fly trap, if one hair is triggered it won’t react and will only do so if the second hair is triggered within 20 seconds, otherwise it ‘forgets’.

These discoveries have led to a questioning if the minimal readings of cognition developed by embodied cognition might apply to plants. In this framework, if cognition can be applied to ‘simple’ animals like nematodes, then is it such a leap to apply it to plants? It has been argued that bacteria provide an example of the minimal cognition threshold, with this intuitive cut-off point drawn at systems that show a form of sensorimotor coordination. This decision to have ‘free-moving’ as a criterion has been questioned by Garzon & Keijer (2011) who also argue that whilst the  lack of mobility is obviously a huge constraint for plants, if one understands their existence within this constraint, it is more dynamic than at first appears. Hence the immobile nature of plants though, should not be taken to mean that they play a purely passive role in their environment as they are sensitive to a variety of signals, not just light and water but also soil structure, neighbour competition, allelopathy and wind.  Plus this lack of mobility, is not the same as static nature of a statue, plants grow and their root systems can be quiet complex, with the nature of the soil, minerals, neighbouring plants, all affecting the development of a root system as well as leading to changes over the course of its life-time.

Numerous arguments have been made for a more open approach towards cognition, if we are to accept these approaches, then should we not fully embrace them and all their consequences. If the human skin can no longer be held as an adequate barrier for cognition, then why stop at bacteria, why not accept plants? It may seem fanciful to some, a folly that harms the serious side to this argument but there should be at least a valid discussion on it rather than an arbitrary decision just not to include them.