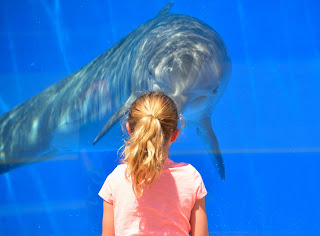 Barrett’s paper, Why Brains Are Not Computers, Why Behaviorism Is Not Satanism, and Why Dolphins Are Not Aquatic Apes, presents the problem of ‘anthropocentrism’.  Anthropocentrism is the tendency, when speaking about cognition, to compare other species with our own.  Human cognition is always the reference point from which we work.  This may seem fair enough as it is the only point of reference we, as humans, can ever really have.  However, it is the inherent value we place in human cognition above all other forms of cognition that is problematic.  We try to understand the cognition of other animals without understanding or considering their Umwelt, or perhaps with a bias towards our own Umwelt.  Umwelt, as presented by von Uexküll, refers to an organism’s environment as it is experienced by the organism.

von Uexküll states, “all animals, from the simplest to the most complex, are fitted into their unique worlds with equal completeness.  A simple world corresponds to a simple animal, a well-articulated world to a complex one.” P.11 Anthropocentrism seems to assume a well-articulated world = a more valuable or real world.  In other words, we do not treat every embodied subject’s experience as carrying equal weight or validity within their respective environments – even if we grant the existence of non-human embodied subjects.


But can anthropocentrism really be overcome?  How can we ever escape our own perspective and experience of the world enough to truly understand the embodied experiences of other animals?  In other words, if all animals ‘are fitted into their unique worlds’, how is empathy possible when speaking of other species?  Again, even if we grant the existence of non-human embodied subjects, how do we relate through embodiment when bodies are so diverse and varied?

In her chapter, Appropriating the Philosophies of Edmund Husserl and Edith Stein: Animal Psyche, Empathy, and Moral Subjectivity, Painter argues we can empathize with animals because they are also unified and complete psychic-material beings.  Unlike inanimate objects, bodies are expressive and meaningful.  They provide us with a general knowledge of the other.  We will never know exactly what it is like to be a dolphin, for example (otherwise we would be dolphins), but it is still possible to classify dolphins as embodied subjects who have experiences.

Do we attribute this classification on the basis of similar physical structures of embodiment?  Do we automatically empathize with mammals more than reptiles, for example?  According to von Uexküll, even the experience of time and space may differ drastically between species and their Umwelten. Pp. 13-31  Without a shared world with shared laws, empathy seems like an impossible feat.  Yet, von Uexküll claims, “The first task of Umwelt research is to identify each animal’s perceptual cues among all the stimuli in its environment and to build up the animal’s specific world with them.” P. 13 This suggests we may gain access to an animal’s Umwelt (subjective experience) if we can identify what it experiences as meaningful in its environment.

Perceptual cues cannot be grasped without movement and action.  We must understand perceptual cues in the context of the projects towards which the animal is directed.  Rather than pointing to similarities in bodily structure or makeup, perhaps we must consider similarities in the projects or actions towards which embodiment is directed in various environments in order to gain a clearer understanding of empathy and overcome anthropocentrism.

For example, humans and dolphins both experience eating, mating, moving, and playing.  We both have bodies perfectly adapted to our unique Umwelten.  Our embodiment is directed towards and situated in our respective environments.  In this way, bodies are expressive and meaningful because of what they do or how they act in the world – not necessarily because of how they are structured or their material composition.  Rather, their material composition must be viewed as evolving to enable their actions or projects in their respective Umwelten.  Therefore, anthropocentrism might be overcome if we consider the actions various bodies facilitate in diverse environments without prioritizing certain actions over others.

von Uexküll, J. (1934) “A stroll through the worlds of animals and men: A picture book of invisible worlds”,  In Instinctive Behavior: The Development of a Modern Concept, translated and edited by Claire H. Schiller, 8-80.  Ney York:  International Universities Press, Inc, 1957.

Painter, Corinne M.  “Appropriating the Philosophies of Edmund Husserl and Edith Stein:  Animal Psyche, Emapthy, and Moral Subjectivity.” In Phenomenology and the Non-Human Animal, edited by C. Painter and C. Lotz, 97-115.  The Netherlands:  Springer, 2007.
Posted by Unknown at 09:06