Did Anyone Else Forget their Brain? 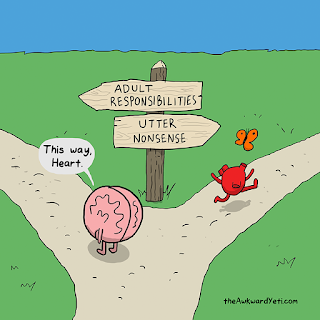 When one dives into the fascinating world of enactive cognition, a necessary part of understanding is to leave the brain at the door. It is key to come to terms with the idea that one's brain is not necessarily the seat of their consciousness. The idea that the word "mind" is better off as a verb than a noun is one that took me some time to adapt to. The mind is not something that simply exists inside if the human skull, it arises from doing. Humans are not intelligent because of their grey matter, instead it comes from their ability to act in their environment. Cognition is not something that takes place in the head but rather takes place during the interaction between the human and its environment from which it is inseparable. This is rather blasphemous from the point of view of a neuroscientist. However, with the respective writings of the wide range of authors like McGann, Froese, Di Paolo, De Jesus, Cummins and Barrett, I found this point of view an interesting and satisfying alternative to the way I had been brought through my previous university studies. Coming from a background in neuroscience, my previous professors would constantly discuss the unequivocal evidence that the brain is the source of consciousness and that functional neural imaging can reveal truths about which regions of the brain are in charge of certain aspects of our life. I am sure they would all be distressed that I have found such comfort in the idea that the mind comes about from action in the environment and is not necessarily the result of action potentials being carried through neurons.
So what is the role of the almighty brain in the enactive cognitive perspective now that it has been dethroned? It may be just as important as the role of the kidneys to the enactive cognitivist, however, I do not believe that means it should be left behind and shunned. Perhaps I am too sentimental but I do not want to see the brain left behind in the realm of research. In the enactive tradition of thinking about cognition, the brain should not be the starting point. In my opinion there is nothing wrong with that and, in fact, I believe it allows humanity an interesting chance to re-assess the brain. If it is not the centre of consciousness or the residency of one's mind....then what is it?
Obviously there has been plenty of research regarding the central nervous system and its role in the human body. However, the vast majority of this research has been done under the pretense that the brain and the mind were synonymous. I am not suggesting we go all the way back to thoughts like the ancient Greeks had about the brain being used to cool the blood. Instead humanity can use this as a fantastic opportunity to take a step back and study the human brain without the air of exceptionalism that has been built around it for centuries.
For instance, while reading Louise Barrett's brilliantly titled paper Why Brains Are Not Computers, Why Behaviorism Is Not Satanism, and Why Dolphins Are Not Aquatic Apes  I focused on how she discusses animals that utilize tools and how they are not inherently more intelligent than other animals. Instead, she discusses how these animals are simply better suited to use tools in their respective environments. Reading this paper brought me back to a paper I read in my undergraduate neuroscience studies. In the paper in question, The white matter structural network underlying human tool use and tool understanding, the authors discuss evidence supporting the notion that it is the coordination of large parts of the central nervous system, not one area of the brain in particular, that helps humans utilize tools. While it would be near impossible to replicate the study on an animal that uses tools (say a crow), I believe a study that replicates the findings of the previously mentioned neuroscience paper in animals would be a large step in reducing the air of human exceptionalism within empirical study. If crows and human beings show the same sort of firing patterns when utilizing tools, that would make the so-called superior human brain that has supposedly created an untold number of unique tools look a bit normal. Humans might be very good at utilizing tools in their environment, but that does not make them the most intelligent creatures on the planet.
While I accept that the brain may not be the almighty golden organ that makes man superior to the rest of the savage animal kingdom, I am not ready to ignore it entirely. Just like the kidneys have an important role to play in the human excretory system, I am sure that the central nervous system has an important role to play. Just not a role that magically creates cognition.....
Posted by Dillen Maurer at 23:02