Does neuroscience promise to make us super-humans? 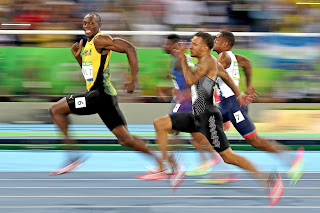 What does it take to master a skill? Helsen et al. (1998) suggested that for an athlete to reach a world-class level of performance at least 4000 hours need to be invested into deliberate practice. Ericsson (1990) takes it even further than that by putting forward a figure of 10000 hours (20 hours x 50 weeks / year x 10 years) to master any kind of skill.

We’re going to leave the question of how a person’s body changes with the skill acquisition for the purposes of this post and look deeper into what happens to a person’s brain. Beilock (2011) hypothesized that as a person moves along the stages of skill mastering from being a novice to becoming an expert, the skill-related knowledge is gradually migrating from working memory localized in a pre-frontal cortex to procedural memory occupying sensorimotor regions. In fact, existing neuroscience research reveals strong evidence for neuroplasticity caused by the deliberate practice. It is now evident that wide structural and physiological changes are happening in both abovementioned areas when extensive training is applied (see, for example, Draganski et al., 2004).

This early research is raising a lot of exciting questions. Can we use our knowledge about neural mechanisms and alterations happening in a brain with skill development to inform training strategies? Knowing the capacity and speed of the brain matter changing with training, can we predict future world-class athletes, musicians and chess masters? Could we potentially replicate the neural structure changes of a skillful person? Or nudge those changes in the brain to happen faster?

Neuroscience researchers have meanwhile been making some progress to offer answers to some of these questions. Thus investigators from HRL's Information & System Sciences Laboratory discovered that applying low-current electrical brain stimulation can facilitate and accelerate learning new skills.  "We measured the brain activity patterns of six commercial and military pilots, and then transmitted these patterns into novice subjects as they learned to pilot an airplane in a realistic flight simulator," says Dr. Matthew Phillips from HRL team.

Even though it does sound like a storyline of a sci-fi movie about the future, several companies, such as Kernel and Elon Musk’s Neuralink have been reported to invest into creating brain-computer interfaces that among other things “may one day upload and download” information directly into and out of a human brain.

If and when this becomes a reality, may be we can learn how to ride a bike a matter of minutes?